Larry King, the radio and television personality whose breezy and conversational interviews with celebrities and world leaders made him a broadcasting icon for nearly half a century, has died, his TV production company Ora Media said in a statement Saturday.  He was 87.

The statement said he had been receiving treatment at Cedars-Sinai Medical Center in Los Angeles.

It did not specify the cause of death, but King was recently hospitalized with Covid-19 and had endured health problems for many years, including a near-fatal stroke in 2019 and diabetes.

“Whether he was interviewing a U.S. president, foreign leader, celebrity, scandal-ridden personage or an everyman, Larry liked to ask short direct and uncomplicated questions,” the statement added. (Source NBC News) 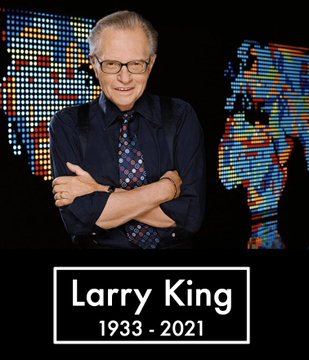 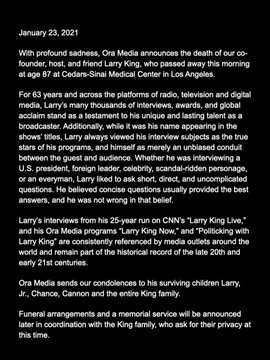 Related Items:
Share
Tweet
Share
Share
Email
Comments
Salt-n-Pepa Movie This Weekend on Lifetime
SZA Says She’ll Ask Frank Ocean To Feature On ‘Good Days’
To Top
Image Suggested dimensions: 490 × 200 Body Footer Sign up success message Pop-up Form Copy/paste onto your site After you embed the code to your site, any changes you make to your form can be published directly from the editor.